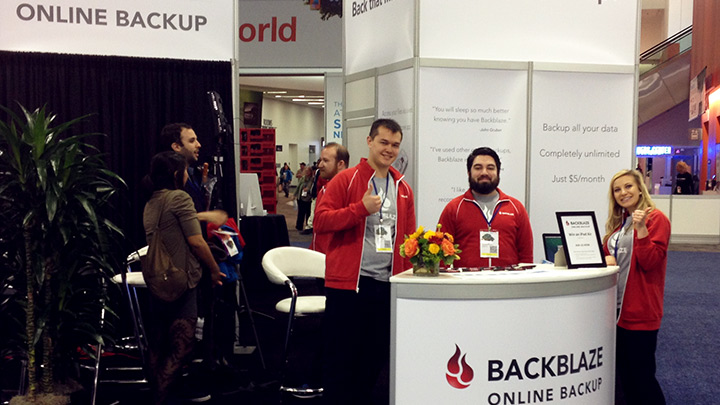 It’s January. Normally at this time of the year we would just be getting back from CES and getting in to the swing of lining up our booth to exhibit at Macworld, but this year is different. Macworld is currently on hiatus, with no clear indication of when or if it will return. Macworld, the magazine, shut down after 30 years in September of 2014, and while it still exists online at www.macworld.com, it doesn’t look like the print edition will be back any time in the near future either.

While some of us at Backblaze have been going to Macworld for years, Backblaze the company has only been going to Macworld as an exhibitor for the last two. We started out, humbly, with a little Appalooza table our first year, then jumped way up to one of the prime slots, with a giant “B” centerpiece. As soon as we tore down our booth last year, we got to thinking about what we could do this year to top our giant “B.” We’re sad that we won’t have the opportunity to meet with our fans, see what’s new, and soak in all the cool that is Apple.

We asked one of our biggest Apple fans in the office, Adam, what some of his favorite memories are from Macworld over the years. He wrote:

I started going to the Macworld Expo in San Francisco in about 1999 when I was still in high school. I grew up in the Sacramento area, so going to San Francisco for the Expo was a fun journey for a high school student, and as an Apple fan, it was like a pilgrimage.

From what I can recall of the Expos from ’99 to about ’02, they were very heavily influenced by the most popular Apple product at the time: the candy colored iMac G3s. Vendors were showing off translucent, candy colored products of all kinds—mice, keyboards, printers—even non-computer products, like lamps in the same color schemes. Moscone Center was crowded and each year there were more and more vendors or demonstrations of products of all kinds—software, peripherals, and the Apple products themselves.

I attended every other year from 2003 to about 2008 and two major themes emerged: Mac OS X, and the iPod ecosystem. As OS X gained more and more traction and got increasingly refined with new versions, Macworld attracted a ton of software vendors, far more than previous years during the 9.x era. On the hardware side of things, the resurgence of Apple as a popular personal computer platform meant there were many companies exhibiting Mac items, but what really blew me away was the sheer quantity of exhibitors with products that worked in the iPod ecosystem. The iPod was so amazingly popular as a media player that there were a massive number of gadgets and stuff to use with your iPod.

However during those years, I did notice some steady decline in the “big name” exhibitors and their booths. It seemed like it just got too expensive and hard to judge the return on investment on having a huge presence at Macworld, so they started pulling out. The last Macworld I attended was 2008, and it was clear that Apple was getting ready to pull the plug as well. It seemed like once Apple decided that Macworld wasn’t right for them—everyone else did as well.

Unfortunately that sentiment rang true, and with fewer exhibitors and attendees, the show eventually went away, all while Apple went on to become the world’s most valuable company. We’ll definitely miss the event, and are grateful to have had the opportunity to meet with so many of you last year and create this video:

Without Macworld, the best places to see all the newness are at WWDC, which is admittedly geared towards developers, and CES, which may not be directly tied to Apple, but a lot of the coolest gadgets and gizmos for Macbooks, iPhones, and iPads make their way there each year.

What are some of your favorite Macworld stories?
What was your favorite item that you saw at a booth or behind closed doors?
What, if anything, do you think will replace the Macworld event?
And where do you go for your Apple fix now?

Update: Macworld the magazine itself has not shut-down as might be inferred from the blog post, but instead has gone digital and can be found at: www.macworld.com.

How to Save Marketing Money By Being Nice
Next Post: What Is the Best Hard Drive?