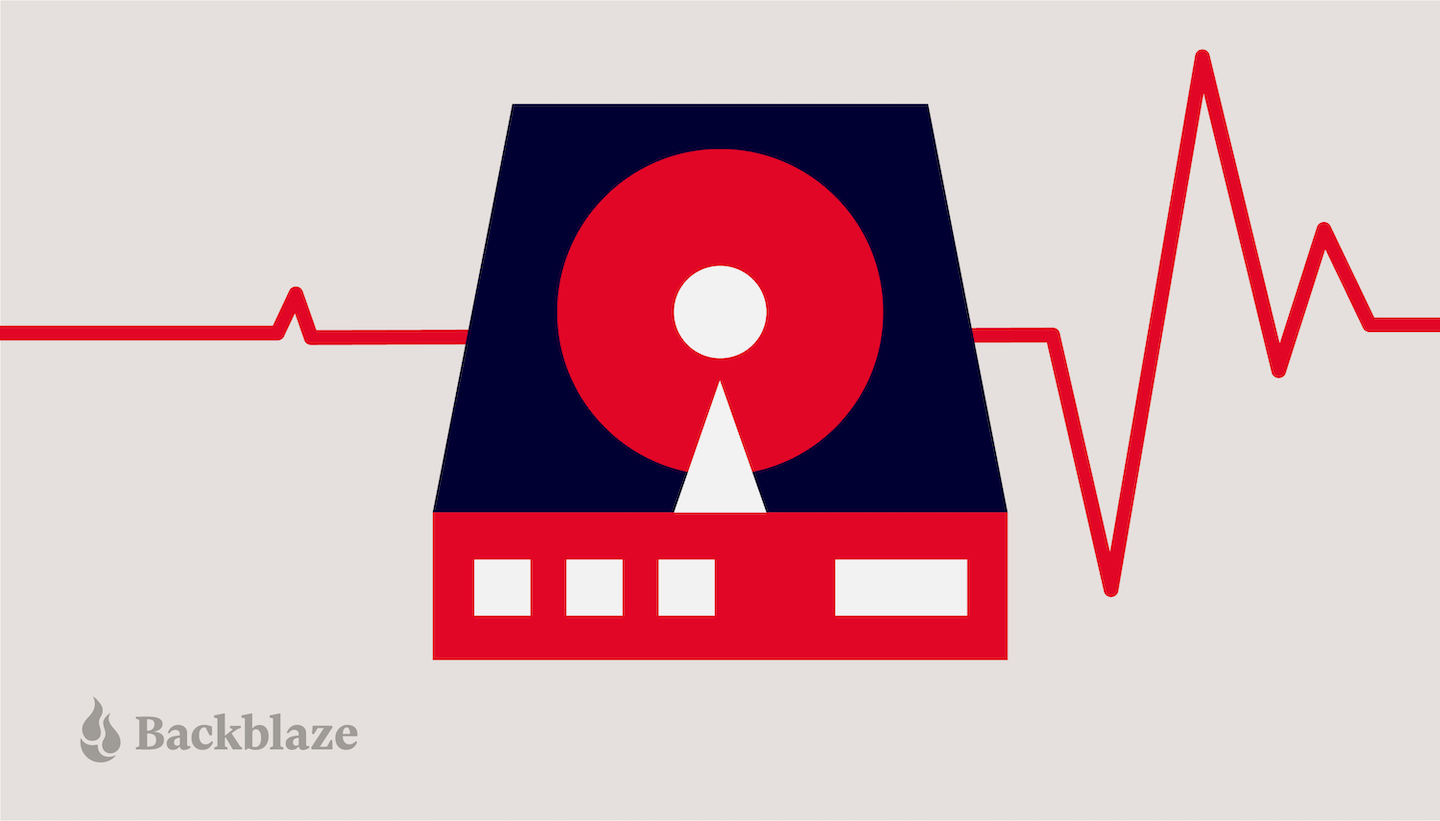 Editor’s Note: This post has been updated since it was originally published in 2013 to provide the latest information and statistics.

How long do disk drives last? We asked that question several years ago, and at the time the answer was: We didn’t know yet. Nevertheless, we did present the data we had up to that point and we made a few of predictions. Since that time, we’ve gone to school on hard disk drive (HDD) and solid-state drive (SSD) failure rates. Let’s see what we’ve learned.

The initial drive life study was done with 25,000 disk drives and about four years of data. Today’s study includes data from over 200,000 disk drives, many of which have survived six years and longer. This gives us more data to review and lets us extend our projections. For example, in our original report we reported that 78% of the drives we purchased were living longer than four years. Today, about 90% of the drives we own have lasted four years and 65% are living longer than six years. So how long do drives last? Keep reading.

How Drives Are Used at Backblaze

Types of Hard Drives in the Analysis

The hard drives we use to store customer data are standard 3.5 inch drives you can buy online or in stores. The redundancy provided by the Backblave Vault software ensures the data is safe, while allowing us to use off-the-shelf drives from the three primary disk drive manufacturers: Seagate, Western Digital, and Toshiba. The following chart breaks down our current drive count by manufacturer. Note that HGST is now part of Western Digital, but the drives themselves report as HGST drives so they are listed separately in the chart. 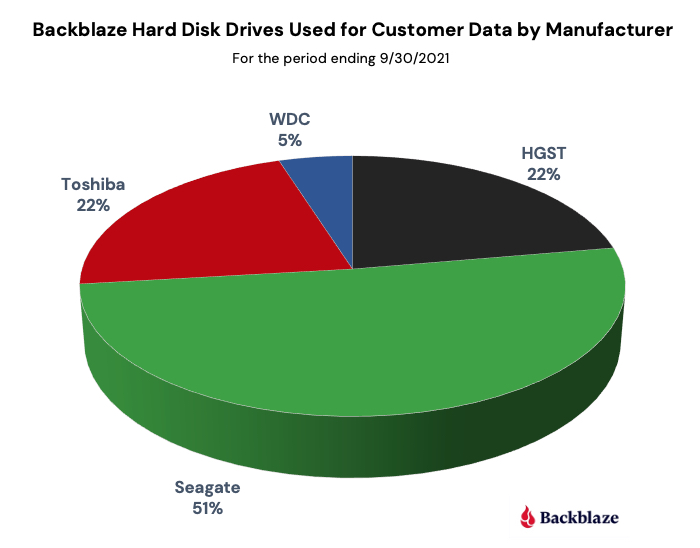 Each of the storage servers also uses a boot drive. Besides the obvious function of booting the server, we also use these drives to store log files recording system access and activities which are used for analytics and compliance purposes. A boot drive can be either an HDD or an SSD. If you’re interested, we’ve compared the reliability of HDDs versus SSDs as it relates to these boot drives.

As stated earlier, we currently have over 200,000 disk drives we manage and use for customer data storage. We use several different disk drive sizes as the table below shows, with over 60% of those drives being 12TB or 14TB in size. 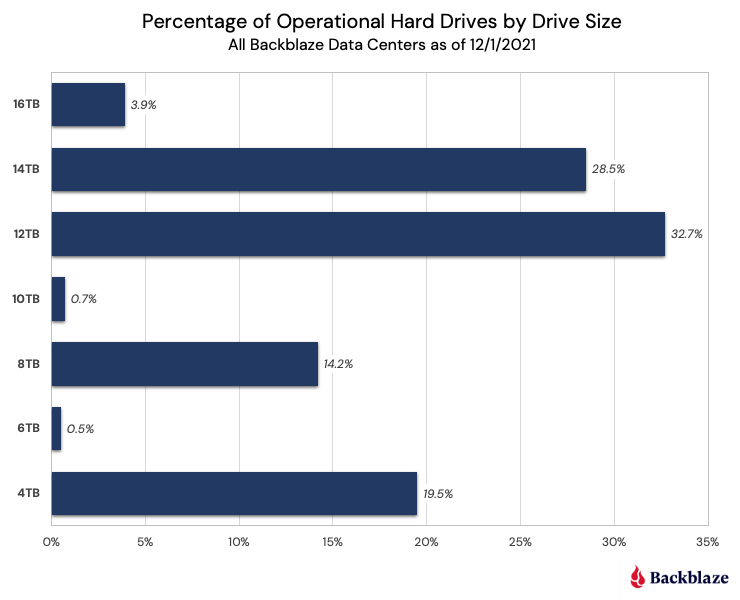 Before diving into the data on failure rates, it’s worth spending a little time clarifying what exactly a failure rate means. The term failure rate alone is not very useful as it is missing the notion of time. For example, if you bought a hard drive, what is the failure rate of a hard drive that failed one week after you purchased it? What about one year after you purchased it? Five years? They can’t all be the same failure rate. What’s missing is time. When we produce our quarterly and annual Drive Stats reports, we calculate and publish the annualized failure rate (AFR). By using the AFR, all failure rates are translated to be annual so that regardless of the timeframe (e.g., one month, one year, three years) we can compare different cohorts of drives. Along with the reports, we include links to the drive data we use to calculate the stated failures rates.

Reliability engineers use something called the bathtub curve to describe expected failure rates. The idea is that defects come from three factors: (1) factory defects, resulting in “infant mortality,” (2) random failures, and (3) parts that wear out, resulting in failures after much use. The chart below (from Wikimedia Commons) shows how these three factors can be expected to produce a bathtub-shaped failure rate curve. 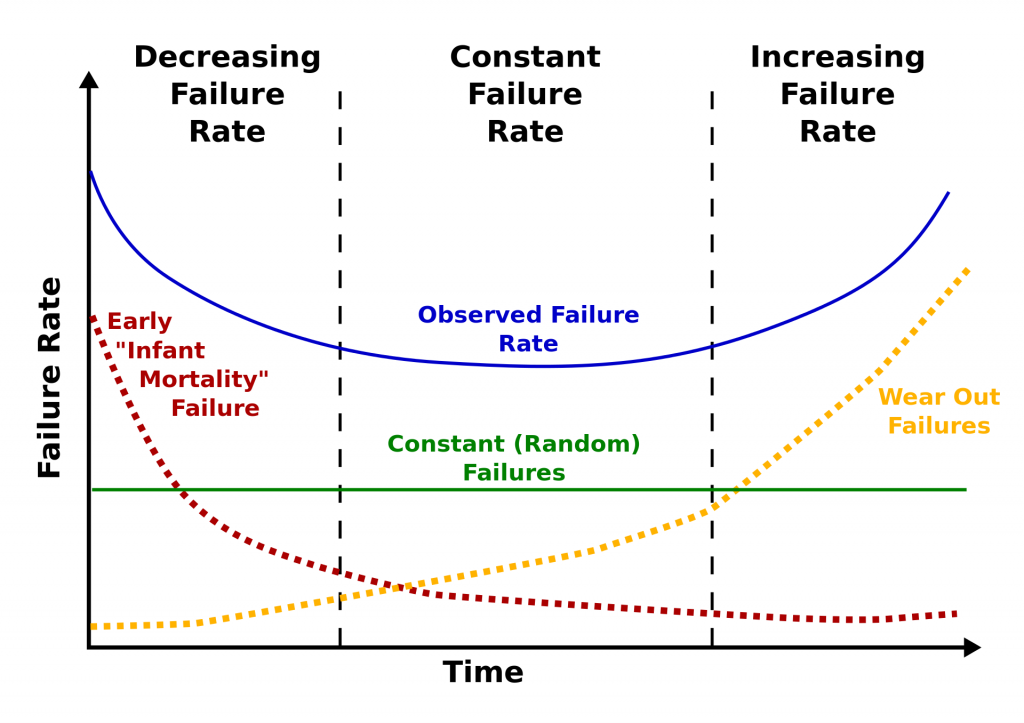 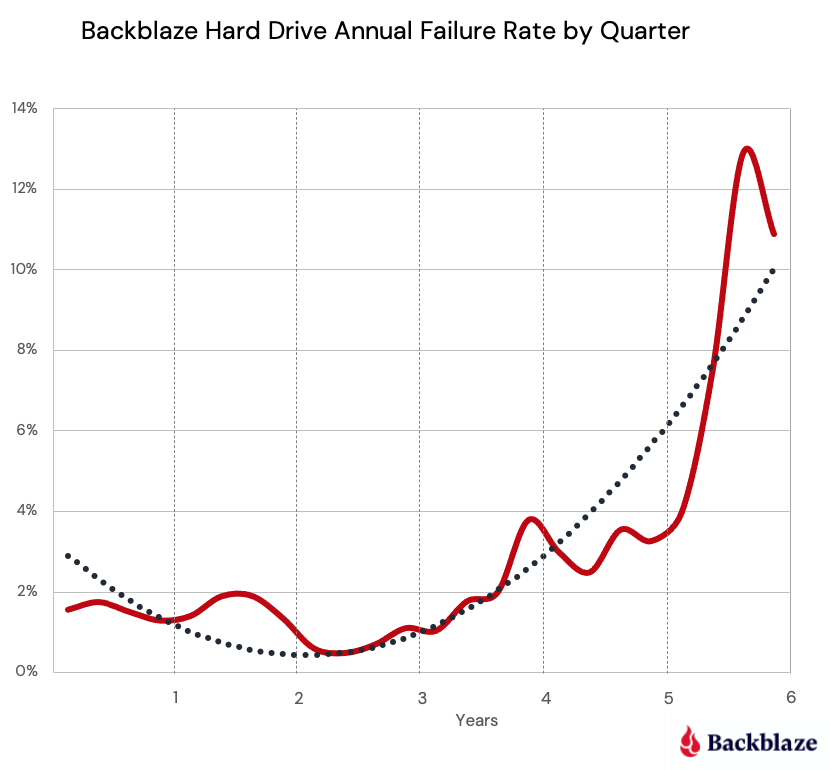 The failure rate (the red line) is below 2% for the first three and a half years and then increases rapidly through year six. When we plot a trendline of the data (the blue dotted line, a second order polynomial) a parabolic curve emerges, but it is significantly lower on the left hand side, looking less like a bathtub and more like a shallow ladle or perhaps a hockey stick.

What’s the life expectancy of a hard disk drive? To answer that question, we first need to decide what we mean by “life expectancy.”

When measuring the life expectancy of people, the usual measure is the average number of years remaining at a given age. For example, the World Health Organization estimates that the life expectancy of all newborns in the world is currently 73 years. This means if we wait until all of those new people have lived out their lives in 120 or 130 years, the average of their lifespans will be 73.0.

To this day it is surprisingly hard to get an answer to the question “How long will a hard drive last?” As noted, we regularly publish our Drive Stats reports, which lists the AFRs for the drive models we use. While these reports answer the question at what rate disk drives will fail, they don’t tell us how long they will last. Interestly, the same data we collect and use to predict drive failure can be used to figure out the life expectancy of the hard drive models we use. It is all a matter of how you look at the data.

When we apply life expectancy forecasting techniques to the drive data we have collected, we get the following chart: 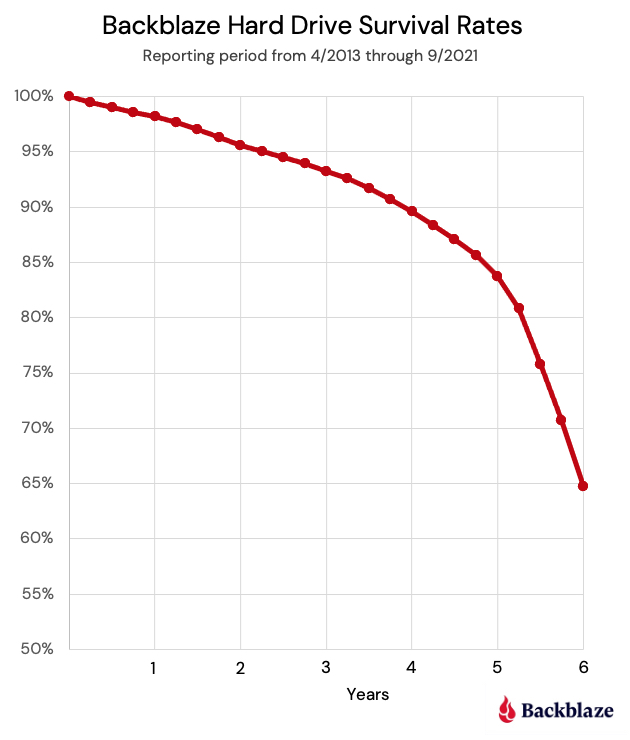 The life expectancy decreases at a fairly stable rate of 2% to 2.5% a year for the first four years, then the decrease begins to accelerate. Looking back at the AFR by quarter chart above, this makes sense as the failure rate increases beginning in year four. After six years we end up with a life expectancy of 65%. Stated another way, if we bought a hard drive six years ago, there is a 65% chance it is still alive today.

How Long WILL the Hard Drives Last?

What happens to drives when they’re older than six years? We do have drives that are older than six years, so why did we stop there? We didn’t have enough data to be confident beyond six years as the number of drives drops off at that point and becomes composed almost entirely of one or two drive models versus a diverse selection. Instead, we used the data we had through six years and extrapolated from the life expectancy line to estimate the point at which half the drives will have died. 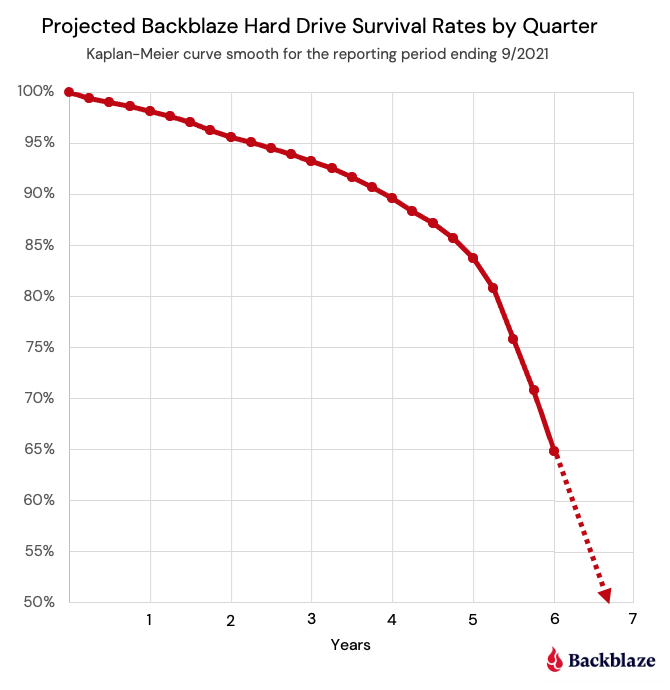 How long do drives last? It would appear a reasonable estimate of the median life expectancy is six years and nine months. That aligns with the minimal amount of data we have collected to date, but as noted, we don’t have quite enough data to be certain. Still, we know it is longer than six years for all the different drive models we use. We will continue to build up data over the coming months and years and see if anything changes.

In the meantime, how long should you assume a hard drive you are going to buy will last? The correct answer is to always have at least one backup and preferably two, keep them separate, and check them often一the 3-2-1 backup strategy. Every hard drive you buy will fail at some point—it could be in one day or 10 years—be prepared.

NAS and the Hybrid Cloud
Next Post: Our Response to the Log4j Vulnerability