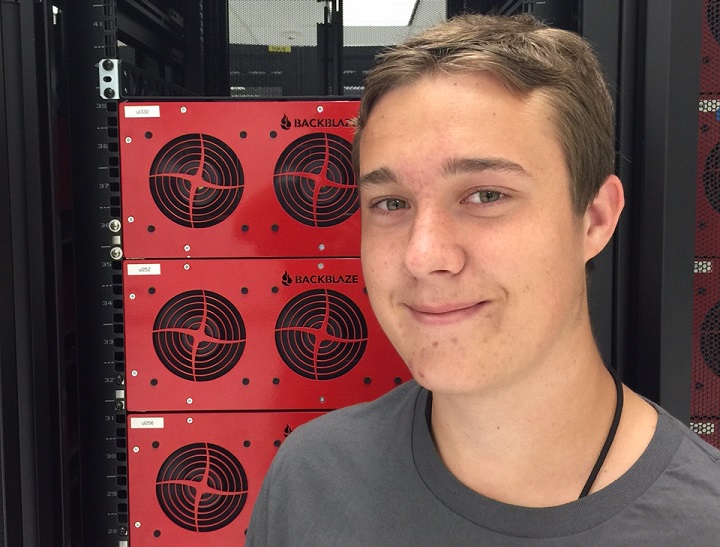 We’ve never had an intern in the data center before, but that changed last week when Larry’s son Steve joined the data center ranks! We needed an extra set of hands to move and tear down a lot of our old chassis, and Steve was a willing volunteer! Lets learn a bit more about our the latest data center acquisition, shall we?

What is your Backblaze title?
Operations Intern.

Where are you originally from?
Reno, Nevada.

What attracted you to Backblaze?
My father’s stories of work.

What do you expect to learn while being at Backblaze?
The work environment of a technology-based company.

Where else have you worked?
The ballpark of the Reno AAA baseball team, The Aces.

Where did you go to school?
McQueen High School.

Of what achievement are you most proud?
Winning state bowl championships seven times.

“Star Trek” or “Star Wars”?
You see, that would be like trying to decide between Coke or Pepsi.

Anything else you’d like you’d like to tell us?
My eventual goal in mathematics is to earn a Ph.D. I would like to use this to work as a professor or for a government agency like NASA.

Since Steve can’t decide between Star Wars and Star Trek or Coke and Pepsi, let’s decide for him! We think he looks like a Star Trek and Pepsi kind of guy. Either way, we’re happy to have a new operations intern in the mix and we know he’ll do a bang-up job in the data center! Thanks for joining us, Steve!

How to Make the Most of Working Remotely
Next Post: Hard Drive Reliability Stats for Q2 2015