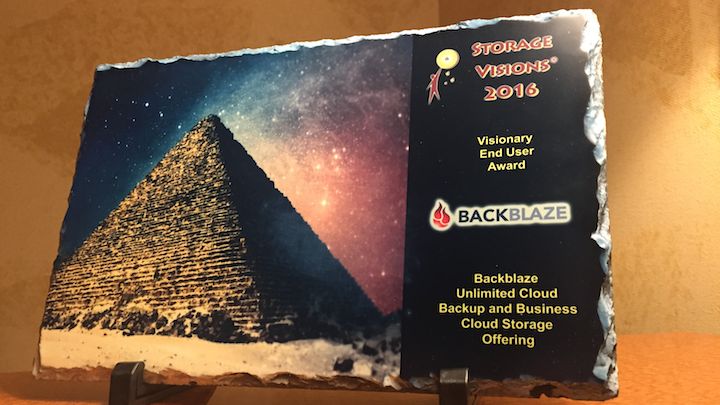 Backblaze finished 2015 by being one of 500 fastest growing technology companies in North America, and we’ve started 2016 by being selected as a visionary that delivers innovative storage solutions. A good finish to 2015 and a great start to 2016.

For the last 21 years, Deloitte has compiled and published a list of the top 500 fastest growing technology companies in North America. For the second year in a row, Backblaze has made this list, coming in at 301st for Deloitte’s 2015 Technology Fast 500™. Award winners were selected for this honor based on their percentage fiscal year revenue growth over the four year period of 2011 through 2014. To finish in the top 500, Backblaze revenue grew 224% during this period. For comparison, if you weighed 125 pounds in 2011 and grew 224% from 2011 to 2014, you’d weigh over 400 pounds at the end of 2014. Last year we were 128th on the list, which considered revenue growth over the five year period of 2009 through 2013.

At the 15th Annual Storage Visions Conference in Las Vegas, the winners of the 2016 Storage Visions awards were announced. These awards recognize companies advancing the state of the art in storage technologies. Backblaze is proud to have won the Visionary End User Award, which recognizes solutions that deliver end users with innovative storage solutions to real world problems. Backblaze won for our cloud backup (Backblaze Personal Backup and Backblaze Business Backup) and Backblaze B2 Cloud Storage services.