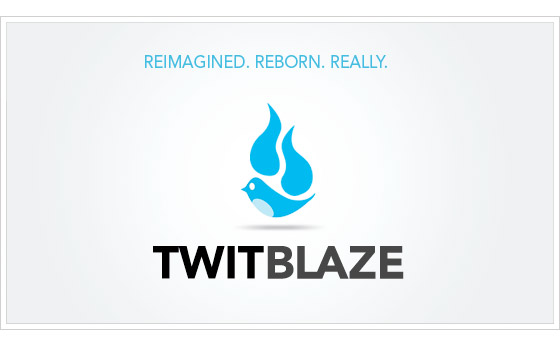 It’s no secret that providing online backup for all of the data on peoples’ computers takes a lot of hard drives. To be specific, four tons of drives show up every week to our datacenter to backup our customers’ school papers, birthday videos, and baby photos… So many baby photos.

After a week of long brainstorming sessions and a recycle bin full of Red Bull cans, we still hadn’t had the amazing light bulb moment.

That was it! The big realization: A quote like that is too good to risk being lost!

Backblaze will no longer back up a customer’s computer; instead we will backup their Twitter account! The idea immediately clicked with the whole team. Brian Wilson, CTO, said “I don’t use Twitter, but if I did, I would totally be bummed if my tweets were no longer available for posterity.”

And with a day of engineering work, we introduce our new path: TwitBlaze

Tim Nufire, VP of Engineering, had to develop a new, patented, artificial intelligence-based compression algorithm to save on storage space, enabling Tweets to be compressed by 64%:

Original: “What is going on in my building? It sounds like a crazy dentist downstairs?”
Compressed: “Crzy dentst dwnstrs—wtf?”

Instead of the last five years of all tweets fitting into one third of a Backblaze Storage Pod, we can now fit all tweets onto a USB stick.

In addition, we had to throttle our large customers who Tweet more than 100 times a month—only their consonants will be backed up. This allows us to keep our costs down for all users by discouraging the messaging hogs.

We are proud to offer five different plans to meet your needs and increase confusion:

4. Unobtainium for $49/month: backs up 20,000 Tweets, your followers, and Ashton Kutcher’s tweets

5. Adamantium for $99/month: backs up 100,000 Tweets including friends, followers, and celebrities. Restores are free via FedEx to you on a 3.5 inch floppy disk.

We are looking forward to providing this new service!
(Well, that, and not breaking our backs carrying all those tons of hard drives.)

Co-founder and CEO of Backblaze. Founded three prior companies. He has been a speaker at GigaOm Structure, Ignite: Lean Startup, FailCon, CloudCon; profiled by Inc. and Forbes; a mentor for Teens in Tech; and holds 5 patents on security.