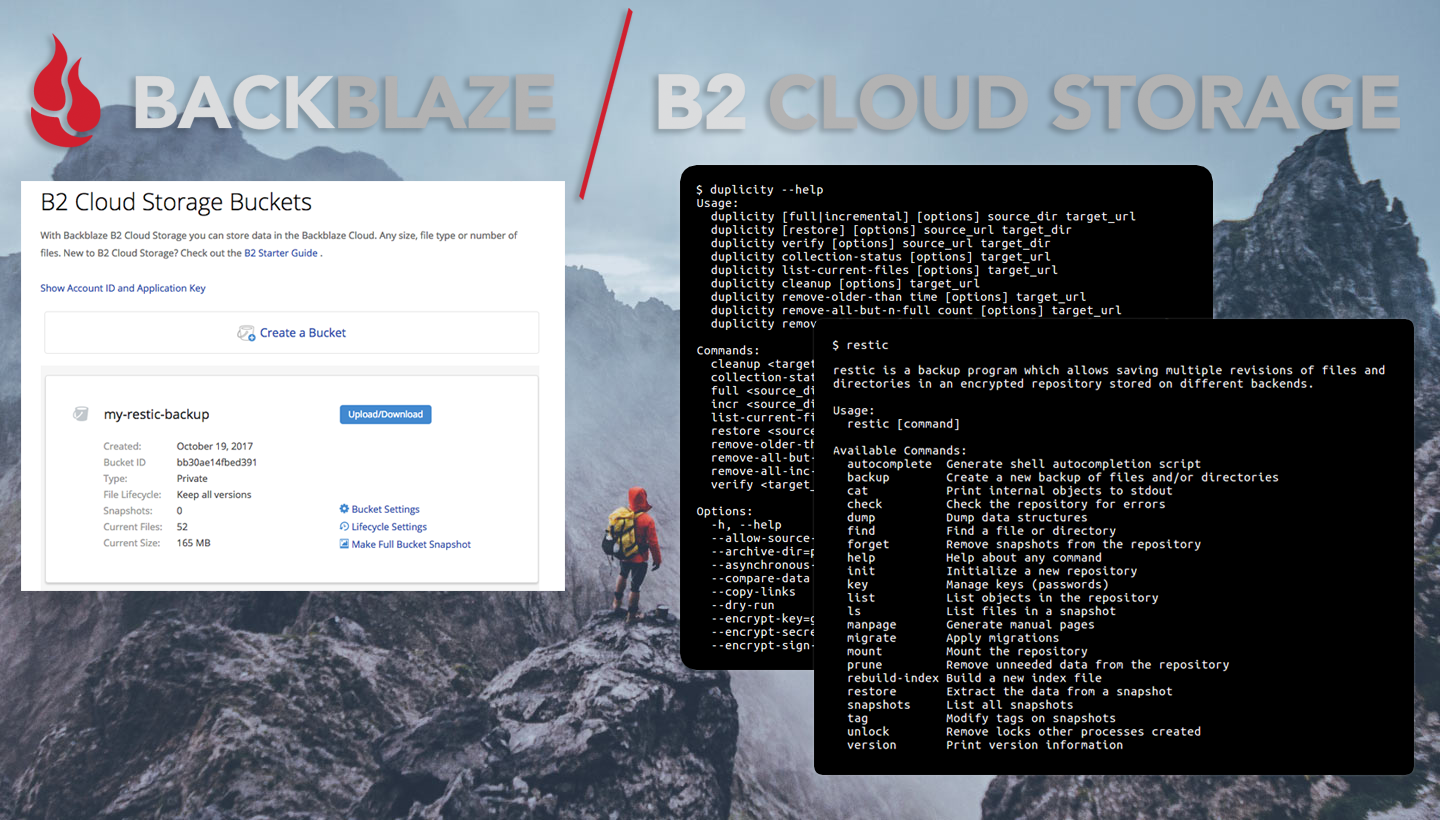 Linux users have a variety of options for handling data backup. The choices range from free and open-source programs to paid commercial tools, and include applications that are purely command-line based (CLI) and others that have a graphical interface (GUI), or both.

If you take a look at our Backblaze B2 Cloud Storage Integrations page, you will see a number of offerings that enable you to back up your Linux desktops and servers to Backblaze B2. These include MSP360 (formerly CloudBerry Lab), Duplicity, Duplicacy, 45 Drives, GoodSync, HashBackup, QNAP, Restic, and Rclone, plus other choices for NAS and hybrid uses.

In this post, we’ll discuss two popular command line and open-source programs: one older, Duplicity, and a new player, Restic.

This old-school model has long been associated with the use of magnetic tape, a prime example of which is the LTO (Linear Tape-Open) standard. In this “write once” model, files are always appended to the end of the tape. If a file is modified and overwritten or removed from the volume, the associated tape blocks used are not freed up: they are simply marked as unavailable, and the used volume capacity is not recovered. Data is deleted and capacity recovered only if the whole tape is reformatted. As a Linux/Unix user, you undoubtedly are familiar with the TAR archive format, which is an acronym for Tape ARchive. TAR has been around since 1979 and was originally developed to write data to sequential I/O devices with no file system of their own.

This is the model used by Duplicity: full and incremental backups. Duplicity backs up files by producing encrypted, digitally signed, versioned, TAR-format volumes and uploading them to a remote location, including Backblaze B2 Cloud Storage. Released under the terms of the GNU General Public License (GPL), Duplicity is free software. 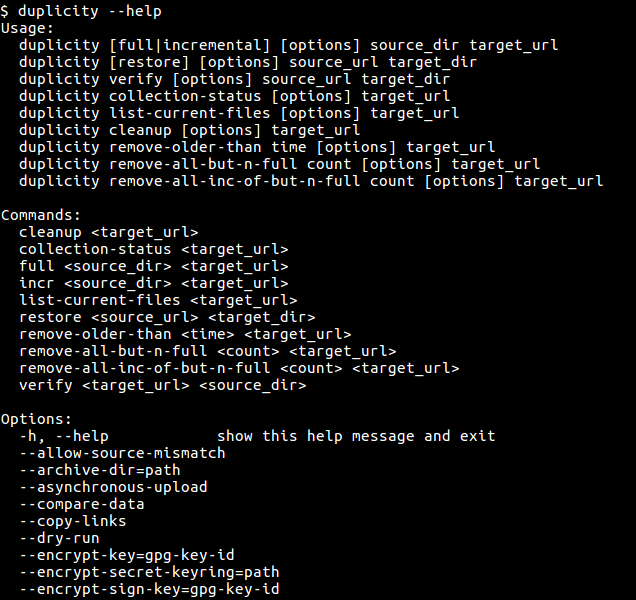 Duplicity is available under many Unix-like operating systems (such as Linux, BSD, and Mac OS X) and ships with many popular Linux distributions including Ubuntu, Debian, and Fedora. It also can be used with Windows under Cygwin.

We recently published a KB article on How to configure Backblaze B2 with Duplicity on Linux that demonstrates how to set up Duplicity with B2 and back up and restore a directory from Linux.

With the arrival of non-sequential storage medium, such as disk drives, and new ideas such as deduplication, comes the new school approach, which is used by Restic. Data can be written and changed anywhere on the storage medium. This efficiency comes largely through the use of deduplication. Deduplication is a process that eliminates redundant copies of data and reduces storage overhead. Data deduplication techniques ensure that only one unique instance of data is retained on storage media, greatly increasing storage efficiency and flexibility.

Restic is a recently available multi-platform command line backup software program that is designed to be fast, efficient, and secure. Restic supports a variety of backends for storing backups, including a local server, SFTP server, HTTP Rest server, and a number of cloud storage providers, including Backblaze B2.

Files are uploaded to a B2 bucket as deduplicated, encrypted chunks. Each time a backup runs, only changed data is backed up. On each backup run, a snapshot is created enabling restores to a specific date or time.

Restic assumes that the storage location for repository is shared, so it always encrypts the backed up data. This is in addition to any encryption and security from the storage provider. 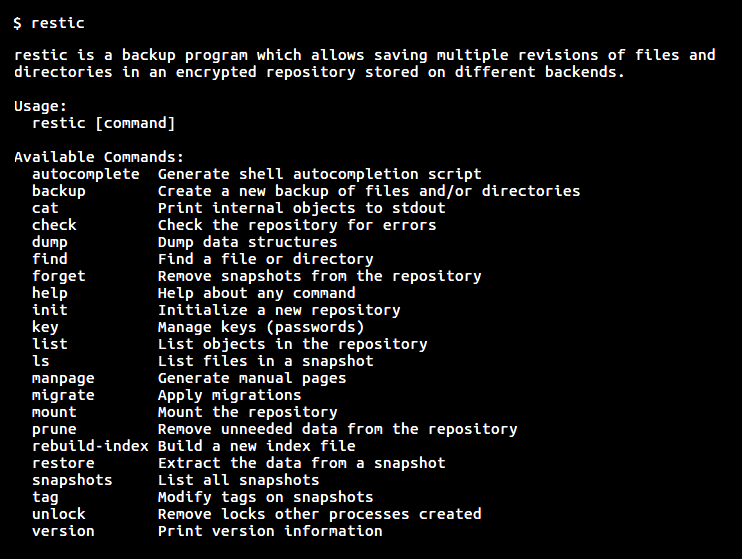 Restic is open-source and free software and licensed under the BSD 2-Clause License and actively developed on GitHub.

There’s a lot more you can do with Restic, including adding tags, mounting a repository locally, and scripting. To learn more, you can review the documentation at https://restic.readthedocs.io.

Coincidentally with this blog post, we published a KB article, How to configure Backblaze B2 with Restic on Linux, in which we show how to set up Restic for use with B2 and how to back up and restore a home directory from Linux to B2.

Which is Linux Backup Method is Right for You?

While Duplicity is a popular, widely-available, and useful program, many users of cloud storage such as B2 are moving to new-school solutions like Restic that take better advantage of the non-sequential access capabilities and speed of modern storage media used by cloud storage providers.

Tell us how you’re backing up Linux

Please let us know in the comments what you’re using for Linux backups, and if you have experience using Duplicity, Restic, or other Unix/Linux backup software with Backblaze B2.

How to Compete with Giants
Next Post: Improved Search for Backblaze’s Blog