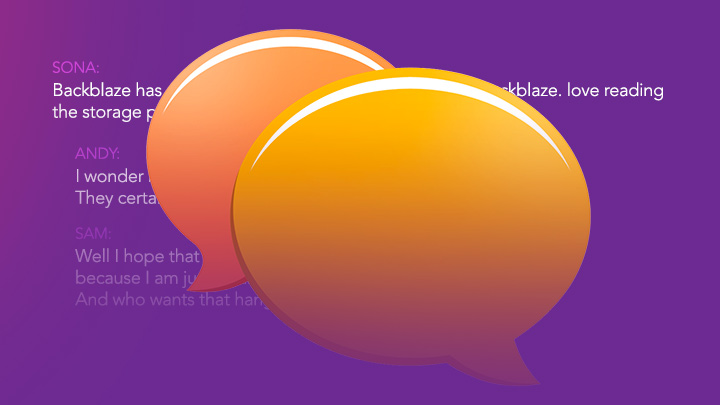 One of the great things about the internet (and possibly one of the worst) is the ability to leave comments and interact with individuals on their blogs or web pages. Recently, Backblaze switched our website and blog to HTTPS. We also moved the blog from blog.backblaze.com to backblaze.com/blog and we updated our blog design and template to, among other things, not use the date in the blog URL.

One of the unexpected casualties of these changes was that the comments you have made on our blog over the years were no longer there. When we set up the Facebook commenting plugin for WordPress all those years ago, the individual comments were tied to the URL of the blog post they appeared on. Since we changed our blog’s URL from blog.backblaze.com to backblaze.com/blog, all of those comments stored by the Facebook plugin were no longer displayed. What was worse, we couldn’t export them out of Facebook, because the URLs used by the Facebook plugin to store the comments had all changed.

When we looked for answers, it appeared that Facebook deprecated their old commenting system a long time ago, but since it was still working on our site, we didn’t notice. Most of our searching resulted in dead ends, even some of Facebook’s own documentation linked off to sites that gave Page Not Found (404) errors.

We had a choice to make. We could either move to the newer, more stable Facebook commenting system, or we could change to another provider. We chose to do the latter, and have made the move to Disqus. We did this for a few different reasons:

Over the years, the comments on many of our blog posts have been engaging and instructive, becoming a valuable resource for our blog readers. As it stands now, our posts are looking a little bit bare. Here is our current plan to try to recover the comments stored by the old Facebook plugin.

Deep Dive (Into the Shallow End of the Pool)

“Hey, Chris from Ops here to give you a little more info on what happened.

Initially, we were using the venerable Facebook Comments for WordPress plugin, which hasn’t been updated in years and was wholly unsupported. Not only that, but the Facebook application IDs and keys that were associated with it were defunct.

To the author’s credits, despite that, it kept on displaying comments and allowing people to post them. How? Magic. Probably.

In any case, we decided that was no good, so we tried out the official Facebook comments plugin. Definitely worked better, but still no direct access to the comments themselves. Less than ideal.

Following the Facebook Developer site advice, we decided to use the comments tool! Unfortunately for us, the “comments tool” is a blank page. Whoops. Well, that’s unhelpful, so we turned to Google for answers.

This brought us to an extremely helpful (at least initially) article! Sadly, the thing that would be truly helpful (the code/scripts necessary to do the export/import) was not included and apparently isn’t going to be released. Dang.

Last ditch investigations involved trying to liberate the comments from the API, which would be a lot easier if they were part of our graph. Unfortunately for us (again), whatever sorcery the old plugin was using to keep working was apparently not putting things into the system in a manner that is easily listable.

With much manual effort, we can pry loose bits and pieces of the data, but a nice automated solution to export and import was out of reach in the given time frame. So, after much discussion, it was decided to go with Disqus and try to get the older comments in later.

I’m sure an expert Facebook developer could set me straight in seconds (hopefully!) but for someone who hasn’t dabbled in the Facebook API too much; it’s been something of an adventure.”

We know it sucks to have your comments missing in action, and as Chris wrote above, we’re trying everything we can to both move forward with our new, more secure blog and maintain the comments that gave life to our older blog posts. In the meantime, if you know of good extraction methods, we’d love to hear them!

Voting vs. Mobile Phones. The Winner Is…
Next Post: Backblaze and Subversion, Time to Change?