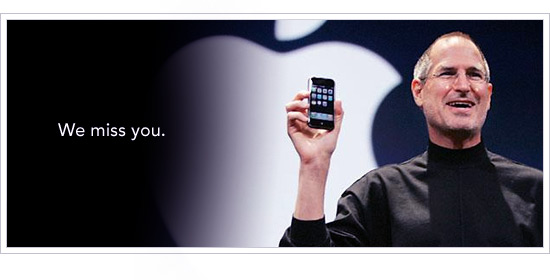 One of our support guys sent an email to the company a few minutes ago saying Steve Jobs died. After a moment of disbelief there was some shock, then sadness. Steve Jobs wasn’t one in a million. He was one in a billion. And while we had never met him, he had a profound impact on our lives.

There will be plenty of tributes to Steve Jobs and the grand scale of his impact.
Here, I just want to share a few small stories:

In 1999, much of what is now the Backblaze team was working on another startup. Some of us loved Apple and pushed to build a Mac version, but at 1% market share, there was just no rationalizing spending time on it. In 2003, we were working on a new startup, but the story was the same: we just couldn’t justify building a Mac version.

Fast forward to 2007, we started Backblaze and decided the Mac would be a first-class citizen at the company. We wanted to support the Mac and believed it had a chance of making some small business sense. Perhaps it would be 10% of our sales.

Instead, the Mac platform is now more than 50% of our customer base. Our CTO, a former Apple employee during the non-Steve Jobs days, said the employees loved Apple, but knew where it was headed. Market dominance with products everyone loves was not that place. The turnaround that has occurred is nothing short of unbelievable.

I vividly remember seeing the first iPhone. I thought it was fake. A mockup or “concept device” perhaps. It was too cool to be real. The iPhone has become a part of my life in a way that I am lost without.

My wife is not a gadget freak, nor a Mac “fanboy.” For a while she rolled her eyes when I would wax poetic about the iPhone. Now she can’t live without hers.

A couple months ago I purchased an Airport Express for our home and sent music via AirPlay from my phone. My wife’s eyes lit up and she said, “Okay, that may just be magic.”

And I guess that was the thing with Steve Jobs. He didn’t just build a reality distortion field; he made us believe magic was possible through his marketing and then really pulled the rabbit out of the hat with the products.

When Apple announced Steve wouldn’t keynote Macworld a couple years ago, we were bummed and handed out flyers showing our support for Steve, to show him he’s being missed. There isn’t much more to say beyond it is a sad day and he will be really missed.

Sean Has a New Friend. His Name Is Guido.
Next Post: Get Well, Amit!