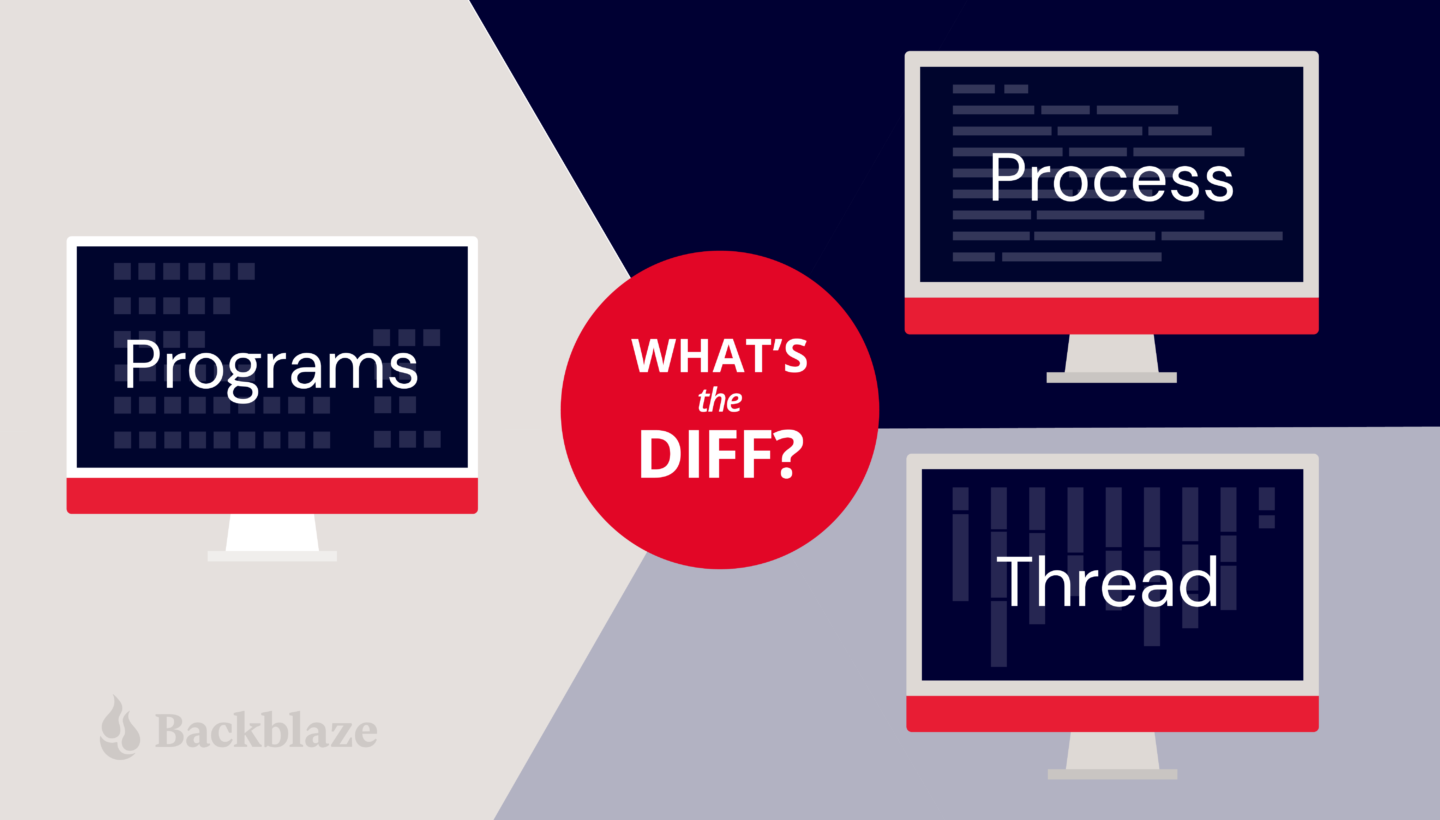 Editor’s Note:
This post has been updated since it was originally published in 2017.

You probably know that computers run programs, but what does that mean? If you’ve ever opened the Task Manager in Windows to fix a problem, you might have seen another term: processes. There’s a related term—threads—that is commonly used as well. At this point, you might wonder if understanding these terms really matters.

Here’s the deal: You likely use a computer for hours every day. If you care about having a fast, efficient computer, it is worth taking the time to understand the difference between programs, processes, and threads. You’ll encounter variations on these terms whenever you look at the Activity Monitor on a Mac, the Task Manager on Windows, or Top on Linux. With a little knowledge, you can skillfully use these tools to quickly diagnose computer programs and come up with solutions, like knowing if you need to install more memory for better performance.

The first step is taking a few minutes to understand the three related concepts: programs, processes, and threads. This post will introduce you to the general concepts. Each operating system may use slightly different terms to refer to each of these ideas. Don’t worry—there will be screenshots to walk you through everything.

A program is the code that is stored on your computer that can complete a certain task. There are many types of programs, including programs built into the operating system and ones to complete specific tasks. Generally, task-specific programs are called applications (or apps). For example, you are probably reading this post using a web browser application. Other common applications include email clients, word processors, and games.

Programs are typically stored on a disk or in nonvolatile memory in executable format. Let’s break that down to understand why.

In this context, we’ll talk about your computer having two types of memory: volatile and nonvolatile. Volatile memory is temporary and processes in real time. It’s faster, easily accessible, and increases the efficiency of your computer. However, it’s not permanent. When your computer turns off, this type of memory resets.

Nonvolatile memory, on the other hand, is permanent unless deleted. While it’s slower to access, it can store more information. So, that makes it a better place to store programs. A file in an executable format is simply one that runs a program. It can be run directly by your CPU (that’s your processor). Examples of these file types are .EXE in Windows and .APP in Mac.

Many programs are written in a compiled language and created using programming languages like C, C++, C#. The end result is a text file of code that is compiled into binary form (ones and zeros) in order to run on the computer. The text file speaks directly to your computer. While they’re typically fast, they are also fixed compared to interpreted programs. That has positives and negatives: You have more control over things like memory management, but you’re platform dependent and, if you have to change something in your code, it typically takes longer to build and test.

There is another kind of program called interpreted. They require an additional program to take your program instructions and translate that to code for your computer. Compared with compiled languages, these types of programs are platform-independent (you just have to find a different interpreter, instead of writing a whole new program) and they typically take up less space. Some of the most common interpreted programming languages are Python, PHP, JavaScript, and Ruby.

Perhaps you’ve heard the programmer’s joke, “There are only 10 types of people in the world, those who understand binary, and those who don’t.”

Ultimately, both kinds of programs are run and loaded into memory in binary form. Programs have to run in binary because your computer’s central processing unit (CPU) understands only binary instructions.

Binary is the native language of computers. At their most basic level, computers use only two states of electrical current–on and off. The on state is represented by 1 and the off state is represented by 0. Binary is different from the number system—base 10—that we use in daily life. In base 10, each digit position can be anything from 0 to 9. In the binary system, also known as base 2, each position is either a 0 or a 1. 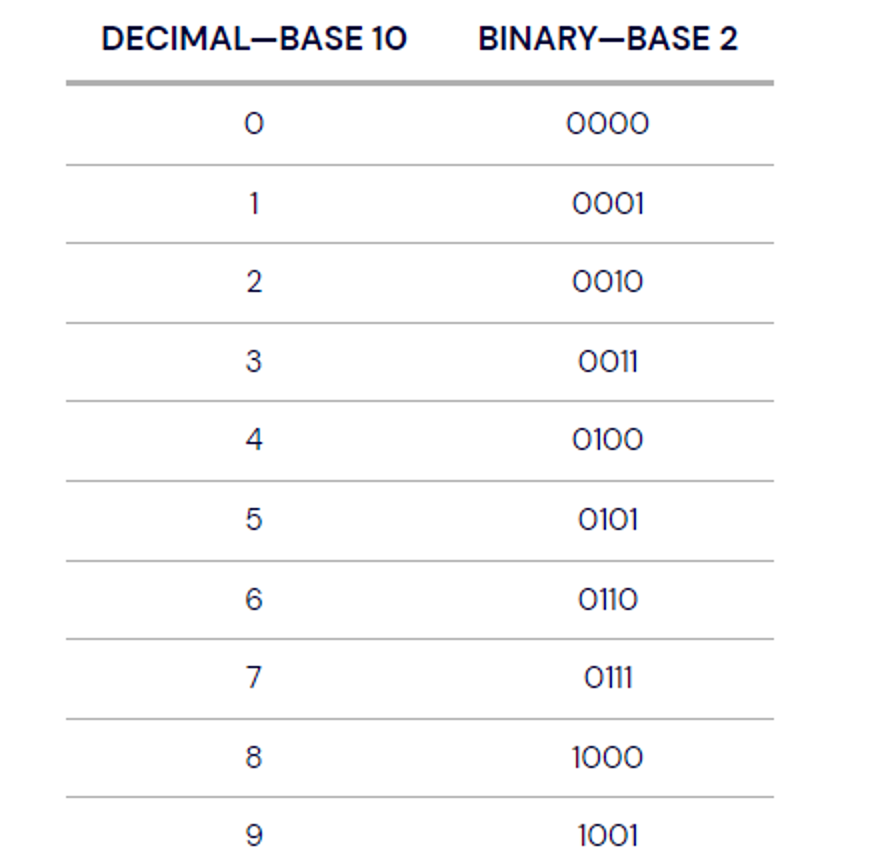 Once a program has been loaded into memory in binary form, what happens next?

Your executing program needs resources from the operating system and memory to run. Without these resources, you can’t use the program. When a program is loaded into memory along with all the resources it needs to operate, it is called a process.

In addition, there are a few essential resources that every process needs.

You might have multiple instances of a single program. In that situation, each instance of that running program is a process. Each process has a separate memory address space. That separate memory address is helpful because it means that a process runs independently and is isolated from other processes. However, processes cannot directly access shared data in other processes. Switching from one process to another requires some amount of time (relatively speaking) for saving and loading registers, memory maps, and other resources.

Having independent processes matters for users because it means one process won’t corrupt or wreak havoc on other processes. If a single process has a problem, you can close that program and keep using your computer. Practically, that means you can end a malfunctioning program and keep working with minimal disruptions.

The final piece of the puzzle is threads. Stick with us here—you nearly have the full picture of how computer programs work and how they use your computer’s resources.

A thread is the unit of execution within a process. A process can have anywhere from one thread to many.

In multi-threaded processes, the process contains more than one thread, and the process is accomplishing a number of things at the same time (to be more accurate, we should say “virtually” the same time—you can read more about that in the section below on concurrency).

Earlier, we talked about the stack and the heap, the two kinds of memory available to a thread or process. Distinguishing between these kinds of memory matters because each thread will have its own stack. However, all the threads in a process will share the heap.

Some people call threads lightweight processes because they have their own stack but can access shared data. Since threads share the same address space as the process and other threads within the process, it is easy to communicate between the threads. The disadvantage is that one malfunctioning thread in a process can impact the viability of the process itself.

How Threads and Processes Work Step By Step

In review, here’s what we’ve learned about threads and processes. Here’s what happens when you open an application on your computer.

Processes vs. Threads: Advantages and Disadvantages

What About Concurrency and Parallelism?

A question you might ask is whether processes or threads can run at the same time. The answer is: It depends. On a system with multiple processors or CPU cores (as is common with modern processors), multiple processes or threads can be executed in parallel. On a single processor, though, it is not possible to have processes or threads truly executing at the same time. In this case, the CPU is shared among running processes or threads using a process scheduling algorithm that divides the CPU’s time and yields the illusion of parallel execution. The time given to each task is called a “time slice.” The switching back and forth between tasks happens so fast it is usually not perceptible. The terms, “parallelism” (genuine simultaneous execution) and “concurrency” (interleaving of processes in time to give the appearance of simultaneous execution), distinguish between the two types of real or approximate simultaneous operation. 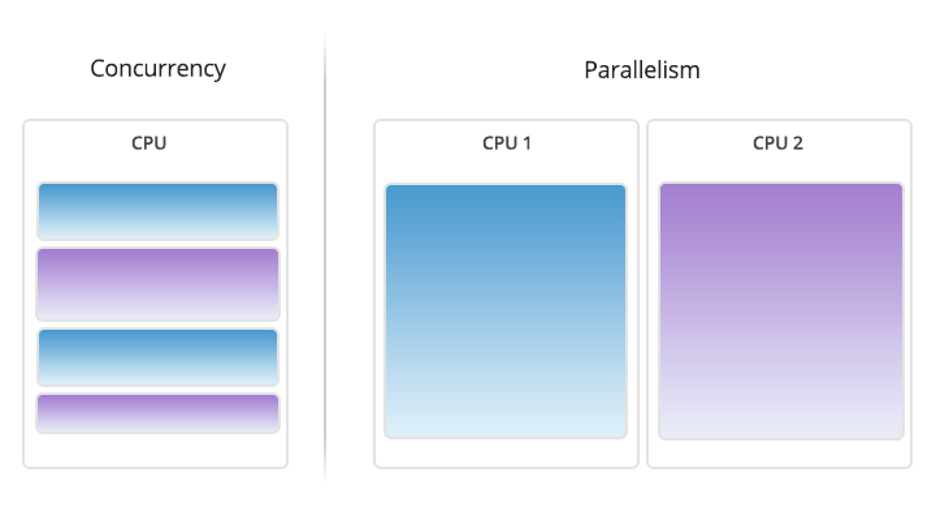 To illustrate the impact of processes and threads, let’s consider a real-world example with a program that many of us use, Google Chrome. By several measures, it is one of the most popular web browsers on the market today.

When Google designed the Chrome browser, they faced several important decisions. For instance, how should Chrome handle the fact that many different tasks often happen at the same time when using a browser? Every browser window (or tab) may communicate with several servers on the internet to download audio, video, text, and other resources. In addition, many users have 10 to 20 browser tabs or more open most of the time, and each of these tabs may perform multiple tasks.

Google had to decide how to handle all of these tasks. They chose to run each browser window in Chrome as a separate process rather than a thread or many threads. That approach brought several benefits.

That said, there is a trade-off cost to Google’s design decision. Starting a new process for each browser window has a higher fixed cost in memory and resources compared to using threads. They were betting that their approach would end up with less memory bloat overall.

Using processes instead of threads provides better memory usage when memory is low. In practice, an inactive browser window is treated as a lower priority. That means the operating system may swap it to disk when memory is needed for other processes. If the windows were threaded, it would be more difficult to allocate memory efficiency which ultimately leads to lost computer performance.

For more insights on Google’s design decisions for Chrome on Google’s Chromium Blog or on the Chrome Introduction Comic.

The screen capture below shows the Google Chrome processes running on a MacBook Air with many tabs open. You can see that some Chrome processes are using a fair amount of CPU time and resources (e.g., the one at the top is using 40 threads) while others are using very little (e.g., one is using just five threads).

The Activity Monitor on the Mac (or Task Manager in Windows) on your system can be a valuable ally in fine-tuning your computer or troubleshooting problems. If your computer is running slowly or a program or browser window isn’t responding for a while, you can check its status using the system monitor.

In some cases, you’ll see a process marked as “Not Responding.” Try quitting that process and see if your system runs better. If an application is a memory hog, you might consider choosing a different application that will accomplish the same task.

Made It This Far?

We hope this Tron-like dive into the fascinating world of computer programs, processes, and threads has cleared up some questions.

At the start, we promised clarity on using these terms to improve performance. You can use Activity Monitor on the Mac or Task Manager on Windows to close applications and processes that are malfunctioning. That’s beneficial because it means you can end a malfunctioning program without the hassle of turning off your computer.

Still have questions? We’d love to hear from you in the comments.

Now that you know how computer memory works in detail, it’s time to take a closer look at storage. Let’s start with a crucial practical question: How long do disk drives last? When you understand how long drives last, you can make better decisions about when to upgrade or replace your technology. Read on to learn more.