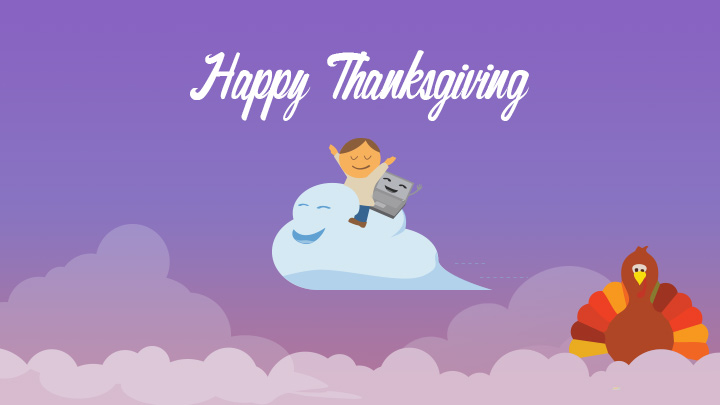 It’s Thanksgiving week here in the United States, so we wanted to follow the grand tradition of showing thanks. At Backblaze, we’re incredibly thankful for all of our loyal customers. Without them, we wouldn’t be here, and we’re pleased as punch that some of them feel the same way about us. That’s why we wanted to take a bit of time and use our fancy new blogging platform to share some of our favorite tweets from this past year:

so good to see all my files again. thanks again @backblaze! pic.twitter.com/qqRqrZxm0P

.@backblaze is definitely one of the best services I've found this year. Such good execution of a simple concept too.

Lost my laptop the day before our launch. @backblaze online backup saved my ass. It is so stealthy that I had forgotten about it. #awesome

You guys. I was not joking about loving @backblaze. Just lost 2.5 years worth of photos on my HD & have been getting them back thanks to bb!

Thanks @backblaze for coming to the rescue. Wouldn't be without the service. pic.twitter.com/cstsP4H8Me

Accidentally deleted 12 years of photos with a poorly written rsync script. Luckily @backblaze had me covered and I got them all back. #phew

I just had my socks knocked off by @Backblaze customer service, and you know it takes a lot for me to say that. Loyal customer for life now.

The bad news: Comcast hates me.

So whether you found us because you were already searching for an online backup product, or you read one of our blogs and decided to give us a shot… Thank you! It means a lot to us, and we’ll continue working to make Backblaze the best online backup program around. Plus, we’re looking forward to seeing your happy tweets someday!