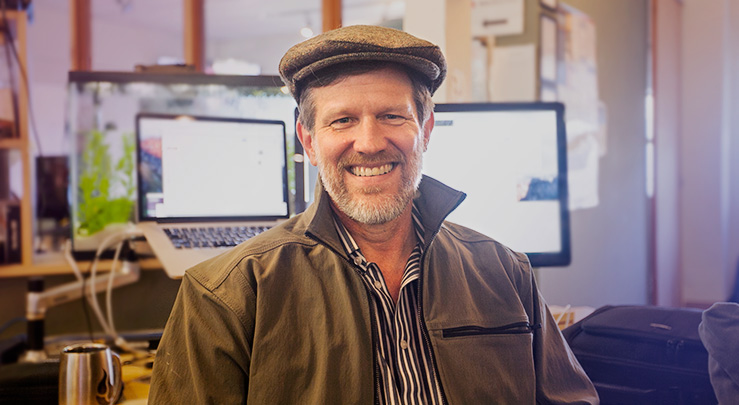 As Backblaze B2 Cloud Storage gets closer to coming online, we’re adding more people to our Engineering team! The latest addition is Doug! Doug joins us from Colorado, where he lives with his family and enjoys the mountain air. Doug is a pretty interesting guy, with a bit of a background in game development. Lets learn a bit more about Doug, shall we?

What is your Backblaze title?
Senior Software Engineer.

Where are you originally from?
The Northwest, up to age seven when a “grand adventure” moved my family to California (Palo Alto, actually—a hop, skip & a jump from Backblaze!). I lived in and around the Bay Area for many years, until “grand adventure” struck again. This time it whisked my grown-up family to the Western slope of the Colorado rockies, from where I’ll be working remotely.

What attracted you to Backblaze?
The enthusiasm that employees (and mutual friends!) hold for the company.

What do you expect to learn while being at Backblaze?
Building solid, low cost, easy to use cloud services on a massive scale.

Where else have you worked?
I got off to a fun start at Imagic, where I wrote the player vs. environment game “White Water!” and Berkeley Softworks, publisher of Commodore GEOS (Yup, that’s me in the “about” box.). Berkeley Softworks became Geoworks, where I developed operating systems underlying some of the first PDAs & smartphones, patented the “Flexible UI” and ran the Berkeley Design Center. Then there was Blue Mug (wireless consulting with a cool logo), AirSet (where I owned group calendaring), and Groopt (owning the front-end of a forms & payments product for member-based organizations). I’ve had the great fortune of working with awesome people at each & every one of these.

Where did you go to school?
Saratoga High, U.C. Santa Cruz & U.C Berkeley, finishing with a bachelor’s degree in electrical engineering and computer science.

What’s your dream job?
The same as at age seven: “Inventor.”

Of what achievement are you most proud?
Two tours performing on stage behind the Iron Curtain as a Friendship Ambassador for the United States.

“Star Trek” or “Star Wars”?
What, no LOTR fans here? I’d be hard pressed to have to choose only one, growing up with “Star Trek,” coming in to full geekdom with everything Tolkien, “Star Wars,” NAOS (the National Administration of Science, a well fleshed out creation of a friend), electronics, and recreational math (Yes, I took tests for fun!) in high school.

Why do you like certain things?
I’m a visual thinker, and am attracted to good design.

Anything else you’d like you’d like to tell us?
My arrival at Backblaze doubles the number of employees with storied pasts involving appalachian mountain clogging.

Mountain clogging… That’s a new one! We’ll have to try and ferret out who the other mountain clogger is! Either way, welcome aboard Doug, and LOTR is a perfectly fine series!