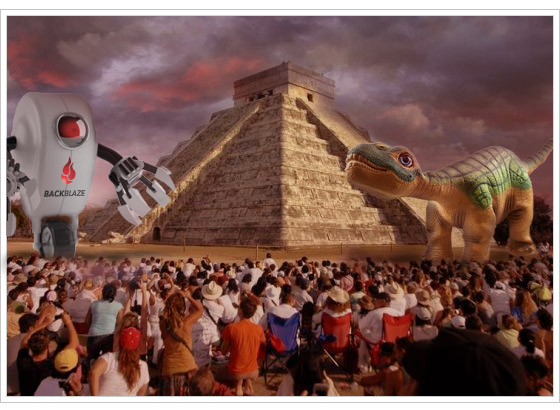 It’s good to have a backup plan. If the Mayans are to be believed, their calendar is ending this year on December 21, 2012 and the world is ending with it. There’s been some previous end of the world speculation before; but this one has Mayan science on its side! Plus Nostradamus also predicted the end is coming soon. Bet you never thought that catchy Gangnam Style tune would bring on the apocalypse, did you?

While it’s widely believed (not really) that the world will end on that day, we here at Backblaze have to ask, what if it doesn’t? The government certainly doesn’t believe in the “end of the world” conspiracy. Or, more importantly, what happens if you are so excited at 12:01 a.m. on December 22nd that the world didn’t end, that you dance around your living room (possibly in the previously mentioned Gangnam Style), spill your champagne onto your computer’s hard drive or knock your laptop off the table and into a hundred accidentally-devastating pieces?

We recommend having a backup plan! Since you’re now thinking about all the silliness that can occur on December 21st, we’d like to remind you that Backblaze online backup continuously and safely backs up photos, music, movies, documents, and other valuable files to the cloud, ensuring they are recoverable when faced with data loss, computer theft, or the impending end times. Backblaze requires no user set up, stores unlimited data, and can also locate your stolen computer—all for just $5 per month. Of course, you could always just take a cruise.

There’s no downside, really—if the world does end, you’ve only paid for the amount of time you’ve used. If the world doesn’t end, well hey, at least you have a backup going forward!